Interview with Saba Sams, winner of the BBC Short Story 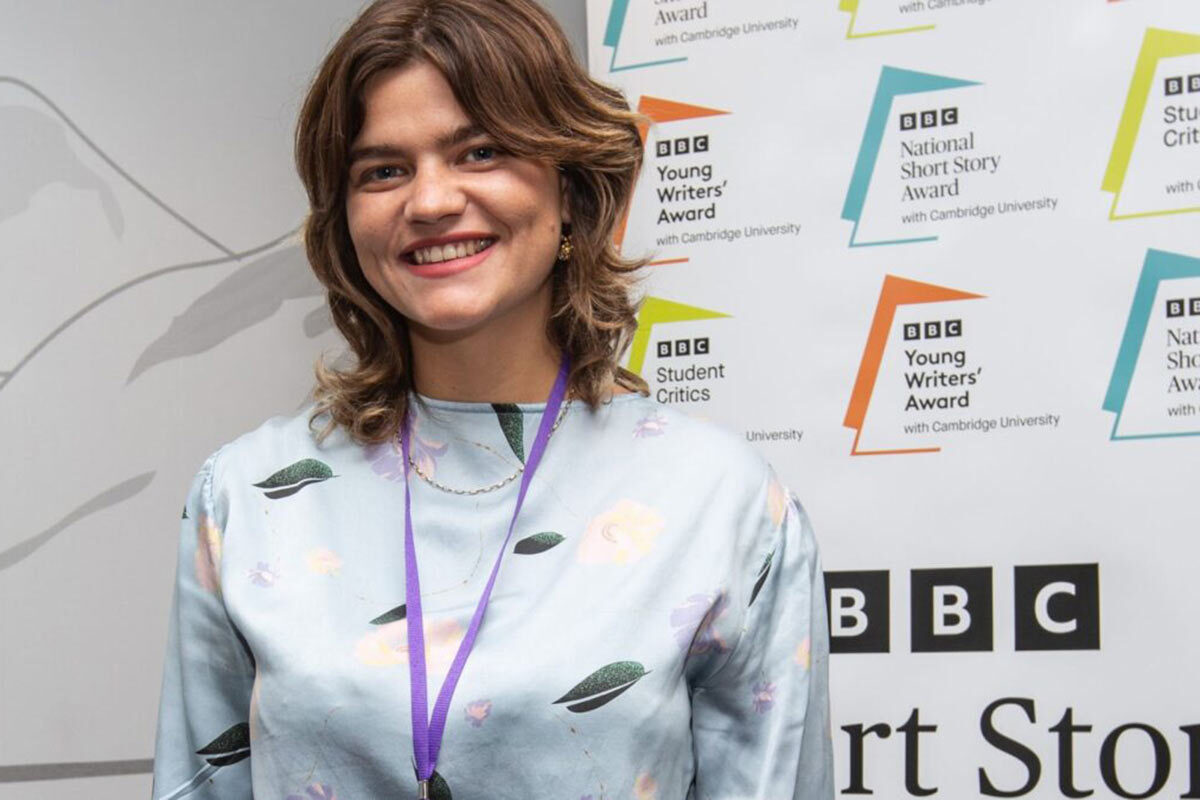 The winner of 2022 BBC National Short Story Award was announced this week as London-based writer, Saba Sams. Following the announcement , we spoke to her about ‘Blue 4eva’ – the winning story.

Blue 4eva is about a 12-year old girl who is adjusting to her mother’s remarriage, and the new blended family that comes with it. It’s a story about sexuality, identity, and trying to fit in. What inspired you to write it?

The setting came first. I’ve been going to Formentera with my dad’s side of the family since I was tiny, and it’s a place that felt so rich with potential in terms of writing. It’s a very small island and a complex, perfectly-formed little world.

How long did this story take to write? I read that you began working on it when you were 19 years old, and returned to it later.

Yes, that’s true. I wrote a very short story – about 1,000 words – when I was nineteen that followed a young girl and her family in Formentera. Later, when I was twenty-three and I was writing Send Nudes, I ran out of ideas so went back through some old stories to see if there was anything I could re-work. After that it all came out quite quickly; I was so surprised when it got to about 10,000 words. Often writing can feel like pulling teeth, but ‘Blue 4eva’ felt almost liquid in the way it spilled out.

How did it change in shape or style along the way?

Oh, it became unrecognisable. In the first story I’d been experimenting with tenses – jumping around between past and present – just as a way of forcing myself to keep writing. I had to do things like that then; I was so scared of the blank page. In the next round of drafts, all those years later, the characters sort of took over, and I found I didn’t need any tricks to spur me on.

Were there any particular challenges with this story that you felt you had to overcome, or battle as a writer?

I remember having to reel myself in quite a lot, having to resist making my characters too jaded, too weak, or too mean. It was an experiment in suspending judgement, in recognising that there’s always a reason for the way a person behaves.

This story was included in your debut collection, Send Nudes. How did publishing earlier this year impact you as an author?

In one way it’s an incredible boost to have a book out and to know people are reading it, and on the other hand when I think about that too hard it’s completely terrifying. I can’t let myself believe that the novel I’m writing at the moment is going to be published at some point, otherwise I completely freeze up.

Why did you enter this story in particular to BBC NSSA?

I’d entered all the other stories that I liked in previous years! This was my last chance to enter a story from Send Nudes, because the book was published this year so won’t be eligible for the competition next year. This time, I got lucky.

Did you have any doubts about it before you sent it in?

This award is so prestigious that honestly I didn’t think too hard about. I truly never thought I’d be shortlisted, let alone win.

What do you think the judges admired about this story? Why does it connect with readers, do you think?

I think it’s quite a human story, as its heart, which seemed to be a theme with this year’s shortlist. Even though so many of the characters in ‘Blue 4eva’ have this hard shell of an ego that they put up for other people, the story is about revealing the cracks.

How did it feel, when your name was announced as the winner? What was going through your mind at that moment?

Complete shock. I still can’t believe it now. It’s such an incredible dream.

How do you feel winning the BBC NSSA will shape you as a writer? Will it change your life, in any way, do you expect?

Financially, this is huge for me. Earning a living from being a writer is near-impossible in this climate, so this prize money feels unprecedented.

Do you have any favourite short stories, or writers who concentrate on the craft?

For short story collections, I’d always recommend Jesus’ Son by Denis Johnson, How to Breathe Underwater by Julie Orringer and Homesick for Another World by Ottessa Moshfegh.

Can you offer any advice to other writers? Anything to help inspire or motivate, or to keep going when things get tough?

Writing can feel really boring and lonely a lot of the time. I think if you can lean more into having fun with it, into keeping yourself energised, then that will come across in the work.

Sophie Haydock is an award-winning author living in east London. The Flames, is her debut novel, longlisted for the Historical Writers Association Debut Crown Award. Sophie also works for the Sunday Times Audible Short Story Award and is associate director of the Word Factory. Her Instagram account @egonschieleswomen – dedicated to the women who posed for Egon Schiele – has a community of over 110,000 followers. For more information, visit: sophie-haydock.com