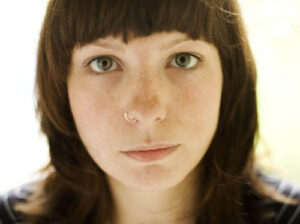 Jenn Ashworth was born in 1982 in Preston, where she still lives. She studied at Newnham College, Cambridge and the Centre for New Writing at the University of Manchester. Before becoming a writer, she worked as a librarian in a prison. Her first novel, A Kind of Intimacy, was published in 2009 and won a Betty Trask Award. On the publication of her second, Cold Light (Sceptre, 2011) she was featured on the BBC’s The Culture Show as one of the UK’s twelve best new writers. Her third novel The Friday Gospels (2013) is published by Sceptre. Ashworth has also published short fiction and won an award for her blog, Every Day I Lie a Little. Her work has been compared to both Ruth Rendell and Patricia Highsmith; all her novels to date have been set in the North West of England. She lives in Lancashire and teaches Creative Writing at Lancaster University.