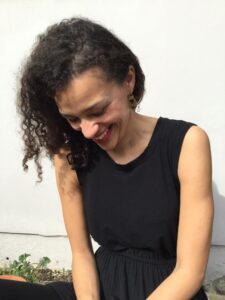 Luan Goldie was born in Glasgow but has lived in East London for most of her life. She is a primary school teacher, and formerly a business journalist.

Her debut novel Nightingale Point (HarperCollins) was picked by BBC Radio 2 for Jo Whiley’s summer book club 2019. She is also a contributor to Resist: Stories of Uprising (Comma Press) for her story ‘The Done Thing’ which is inspired by the women’s strikes at Ford Dagenham.

In 2018 she won the short story prize at the Costa Book Awards for ‘Two Steak Bakes and Two Chelsea Buns’. Her short stories have also been long and short listed by Spread the Word and the Grazia/Women’s Prize First Chapter competition.