Around the World in Eighty Stories: Interview with Susmita Bhattacharya 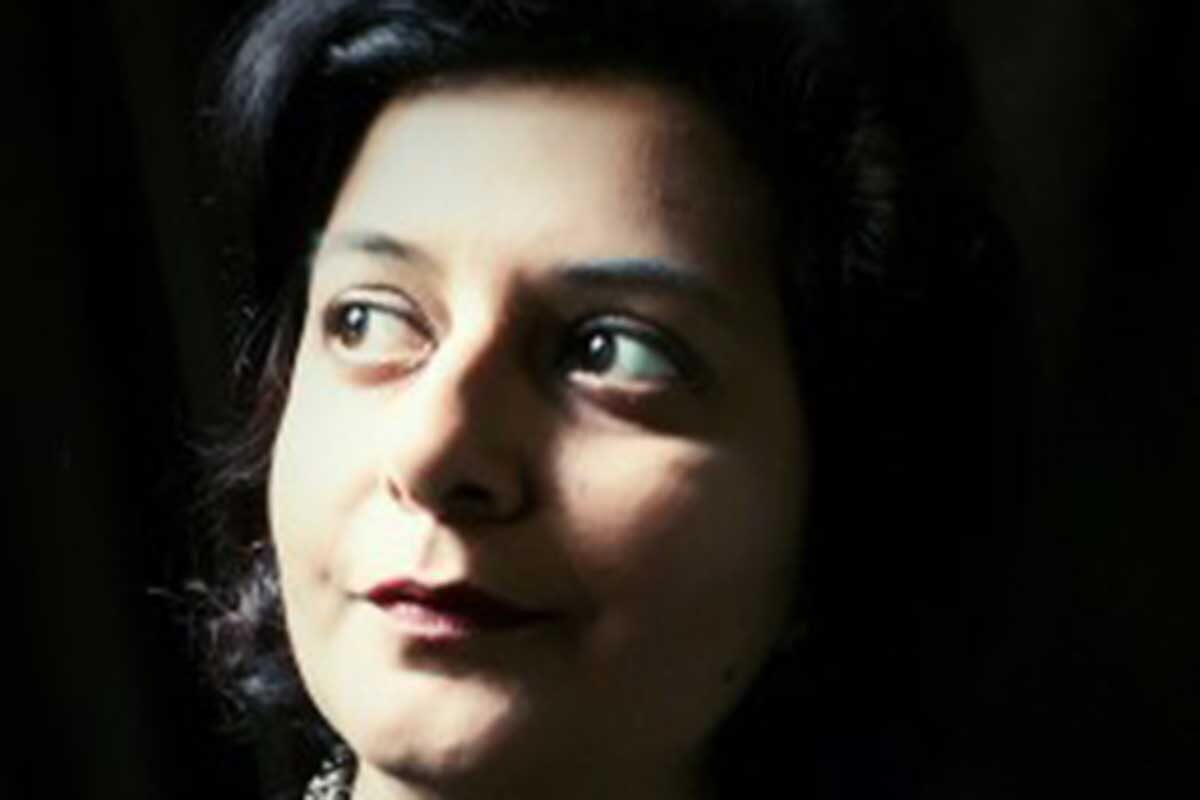 Interviewed by Lily Kuenzler for The Word Factory

Well, perhaps not quite eighty, but with a collection of short stories under her belt (Table Manners, 2019), one novel published (A Normal State of Mind, 2015) and another in the works, Susmita Bhattacharya’s writing will leave you feeling deliciously full.

Trained as a graphic designer, Bhattacharya, our current writer-in-residence, came to words in a most unusual way: designing a programme for the travel company Thomas Cook. But to anyone who is familiar with Susmita’s work, this comes as no surprise. Born in Mumbai, the first time she left India was to sail the world for three years on oil tankers. Eventually she settled in Cardiff, and has lived in the UK ever since. Sounds like quite the adventure, doesn’t it? But for those of us who don’t have the opportunity to set sail in search of experience, then Susmita Bhattacharya’s writing will make you feel like you have.

In this interview we talk about travel, adventure and food — and the delicious richness these things can bring to a text. So sit down, grab a plate, and tuck in.

Growing up in Mumbai and moving to Cardiff — what was that like?

Well, actually, before we moved to Cardiff we lived in many other places. I got married and then we sailed from Mumbai on oil tankers for about 3 years. Then we moved to Singapore, and we were there for a year. We moved to Cardiff because my husband had applied for a PhD there.

The oil tanker sounds fascinating, what sort of experience was that?

It was amazing, because I did not know what to expect — who wouldn’t want that sense of adventure? But it had its drawbacks. I was often the only woman on board and the men were usually working for very long hours. And there was a sense that you couldn’t really mix with people. Especially because I was the Captain’s wife, people weren’t coming over to me and slapping me on the back or anything. It could’ve been lonely but I think it suited me because I love my own company. It was the perfect time to paint and write. I wasn’t really writing for anyone. It was just a hobby then. I used to write my diary and loads of letters back home describing my experience.

So, even though you’ve not always wanted to be a writer, you’ve always had writing as part of your practice?

Yes, I’ve written as far back as I can remember. But as a child my main passion was art. My first career was as a graphic designer, then I went into web development. That’s actually how I came to professional writing — they used to give me all the copywriting and I realised I enjoyed doing that. We got the contract to develop a touch screen kiosk for Thomas Cook: we had to write a lot of travel articles and travel pieces for their website. I hadn’t been to any of these places so I was just looking at pictures and writing as if I was there. Which was funny because when I went on this ship around the world and I went to these places I was like — hey, I know this because I’ve written about it and now I’m actually here!

Anyone who reads your writing would pick up on the cultural diversity in the locations you write from and the characters you offer. What drew you to include such a tapestry of different perspectives?

I was trying to get at the heart of these different people from different places. When I was growing up I never wrote about Indians, though I’d never been abroad. The books that I read were the Enid Blytons and Nancy Drews. I never read about anyone like me. All my stories as a child had protagonists who were white and living in England. Now when I look at them I think it was more like fan-fiction: I was just copying Enid Blyton. But later I started reading more Indian and South Asian writers, and I realised I could relate to them. It actually happened when I moved to Cardiff and enrolled in an evening writing class. I just wanted to see what this writing class was — I’d never heard of such things in India. I felt I couldn’t write about my old characters anymore because I didn’t know anything about how people actually lived in the UK. I made mistakes, like writing about daffodils blooming in December. I had no idea! I was connecting it to India because December is when all the flowers bloom there. I just picked something from there and put it here, but it was wrong. And I learnt that you’ve got to write what you know. But I challenged myself, once I got comfortable. I was lucky that I lived in lots of different places and got to know different cultures. In Cardiff I taught English. Lots of my students were refugees, asylum seekers and immigrants. They would talk about their lives and I got to hear about many different situations which would reflect in my stories.

You called your short story collection Table Manners. Why did you decide on this name for the collection?

In different cultures everybody has a different way and etiquette for sitting at the table. Table Manners talks about food and these stories are like little tastes of different places. That’s what my publisher and I thought would encapsulate the whole theme I was trying to talk about.

I’m so glad you brought up cooking, because food is such a big part of your writing. There are some dishes that stuck out to me as coming up over and over again in your writing: would be fair to say that these are flavours from your life?

They absolutely are. And I think they are probably metaphors for what I’ve left behind. Bhel Puri reminds me of Mumbai. Just saying the words I can picture myself on a street watching somebody making it — I can taste it now. The steamed hilsa is from Calcutta. My mother-in-law makes the most amazing fish curry. When I was on the oil tankers I didn’t cook for three years. Cooking was not something I did until I had my own kitchen. And then I was at a loss. But slowly I found that I could take control and make what I wanted to make. So, I think the food bit comes from there. Also missing food which I can’t replicate. Food for me is really important.

Your writing in The Normal State of Mind is incredibly sensory. Is that a conscious part of your writing in general or does it come specifically when thinking and writing about India?

This was my first novel which I started as my Masters dissertation. I was very nervous about writing it. I wanted to make sure I put in everything I had learned about showing, not telling etc. I think now I might do it a little differently. I’m not sure. I’m afraid I might have made it a bit exotic. What I’m writing now is set in India as well, but its grittier. It’s not all about food and colours. I enjoyed writing ‘The Normal State of Mind’ and I was very conscious of describing the tastes and the senses. Maybe because I missed it.

How did you choose Dipali and Moushumi as the characters you wanted to follow?

Ah, that’s interesting, because when I started writing The Normal State of Mind, it was not a linear process. It was like a jigsaw puzzle. I started by writing the climax. And then I went a little forwards and a little back. I wrote the whole first draft and Moushumi didn’t feature as a main character. It was really helpful giving the manuscript to a friend because he said: “I think that somebody’s voice is missing.” And I agreed. When authors say a character speaks to them, it literally happened like that with Moushumi. She just pushed her way in because she was an important character. Her story needed to be told. I had to rewrite it in alternating chapters to bring her to the fore. The first chapter was the last thing I wrote. And that climax scene that I had written didn’t feature in the book at all!

You’ve said before of your short stories that you often begin with the last line. Can you talk me through that process?

I have this question in my mind when I look at things, I ask: ‘What If?’ That question often brings me to the ending. For example, the first story in ‘Table Manners’, ‘The Right Thing To Do’, I first thought of the final image of the toothbrushes in the mug. I was in the bathroom one morning and I looked at the toothbrushes and they were touching and I thought: Oh, this is very intimate. They were just mine and my family’s. I wouldn’t like any stranger or anybody else’s toothbrush in that same cup where we keep ours. That got me thinking, what if there was somebody else’s toothbrush there? What would that mean? I just started thinking like that and then worked backwards into the story line.

Do you have any advice for our budding short story writers at Word Factory?

Everything is an inspiration. The smallest of images, which you wouldn’t think about — there’s more to it. I gave you the example of the toothbrushes: such a mundane thing. But when you think about anything, always think about the question ‘What if?’ Start thinking about what is around the image or around the memory and start building from there. And don’t be stuck on ideas. Be ready to change. Be ready to evolve. And maybe what you started with doesn’t end up as the final image, the final story, but be open to that change. And believe in yourself.

Susmita will give a masterclass on weaving elements of the personal from your life into fiction on April on April 27th. Details here: https://www.eventbrite.co.uk/e/masterclass-translating-life-into-fiction-susmita-bhattacharya-tickets-138239115917?aff=ebdsoporgprofile

As our writer-in-residence, she also has a few one-on-one slots available.More details at Word Factory Eventbrite: https://www.eventbrite.co.uk/o/the-word-factory-4713341039