Love, Lust and Landscape: A Review of Kevin Barry’s That Old Country Music 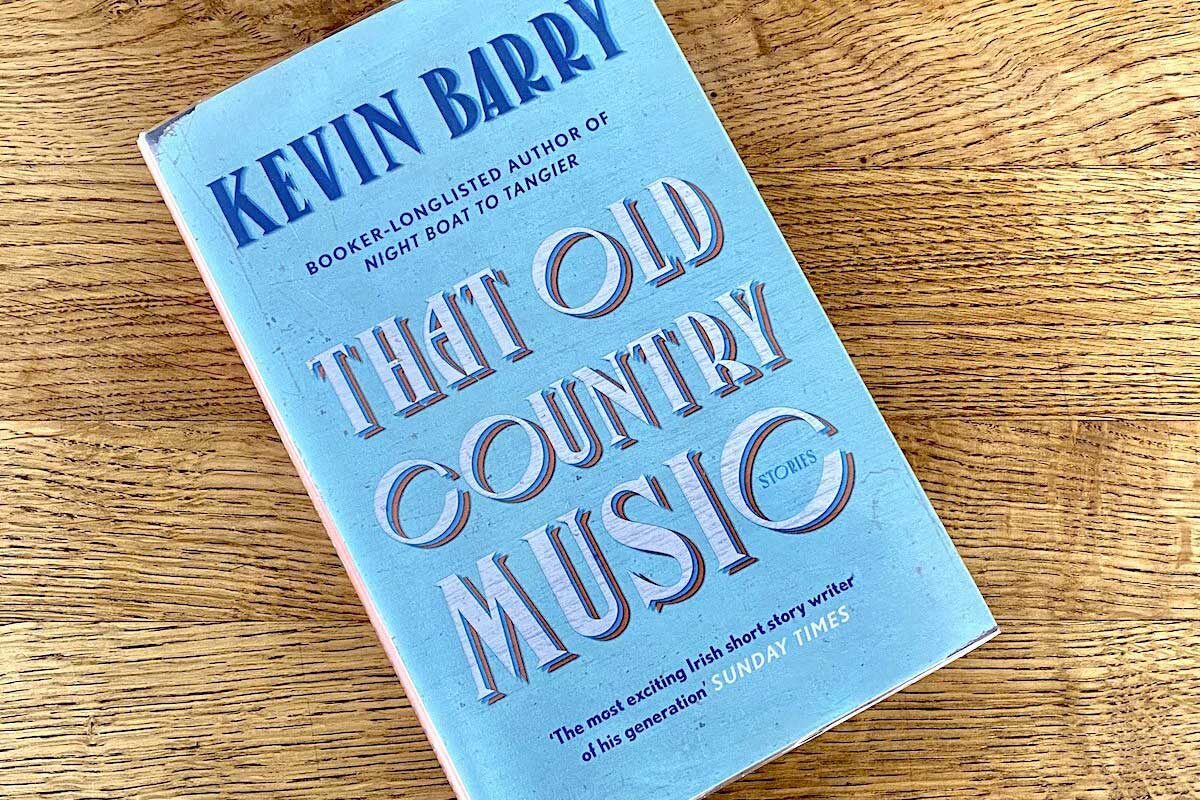 That Old Country Music is an evocative collection of eleven short stories showcasing Kevin Barry’s wry wit and faultless lyrical prose. They’re full of lust and love, sorrow and heartache, and they’re rooted in old earth. The west of Ireland does not sit quietly in the background here, it lives and breathes in the book’s characters. Barry animates the landscape with pristine poetics, and several of the protagonists have an inkling that there’s more to the land than meets the eye.

Back in October 2020, the Word Factory hosted an online event with Barry to discuss his book and the impact of geography on writing. “The place colours the work”, said Barry. Months later, after a winter spent in lockdown and attention turned entirely to the local, the phrase has stuck in my mind.

However, location is not the sole theme of the book. The collection is prefaced with a quote from Jane Campion; the romantic impulse is in all of us but it’s not a “sensible way of living”. Rather, it’s a “heroic path that generally ends dangerously.” This prepares us for heartache from the get-go, although it soon becomes clear that the characters aren’t entirely in control of their futures.

Marking the midway point of the book, in ‘Saint Catherine of the Fields’, we are told that we “have no agency in our romantic manoeuvres”, that the deciding factors of our fate are “out there already, on the air.” It echoes Campion’s sentiment but also alludes to the undertow of magic that lingers in Barry’s landscapes.

This notion, of geography affecting mood beyond the ordinary, is presented to us from the onset. In ‘The Coast of Leitrim’ we meet Seamus Ferris, an awkward, obsessive character who can “handle just about anything, he felt, shy of a happy outcome.” He falls hard for Katherine, or at least his perfected version of her, but he’s a saboteur of his own happiness. Once he becomes fascinated with her “thickset knees” it’s a slippery slope towards disaster.

The story, littered with witticisms and perfectly-crafted dialogue, occasionally bursts into poetic splendour; “The light was thickening over the river now before eight. On Dromord Hill the colours of heartbreak came through.” Fortunately for Seamus he’s in tune with the “soft magic” of the winter-grey sky, his feeling extends beyond that of the “ordinary realm” and there’s the chance of happiness yet.

‘Deer Season’ follows, with a female protagonist on the cusp of adulthood. Desperate to lose her virginity before the summer ends she sets her sights on an easy target, though again, it’s the “idea of him” that fascinates her, rather than the man himself. In the end her emotions catch her off-guard, but out in her remote location, amongst the “sentimental grasses” and the river that “talked to itself of all it had seen”, we’re given the impression that life couldn’t have played out any other way for her.

Another chase follows in ‘Ox Mountain Death Song’, as Sergeant Brown hunts down the latest in a long line of notorious ne’er-do-wells — the Canavans. Brown is as equally obsessed as the first two protagonists were in their own pursuits, whilst Canavan is part and parcel of the Ox Mountains themselves. We’re told that Canavan’s powers “were affiliated with the supernatural”, so he knows every nook, cranny, and hiding place on the coast. ‘Ox Mountain Death Song’ is full of sardonic humour and sharp dialogue, and we’re constantly reminded how both hunter and prey fulfil the roles of their predecessors.

Boldly playing with the impact of place on the human condition, next up is ‘Old Stock’. The narrator, a nervous wreck of a novelist, inherits his uncle’s cottage whereupon he instantly encounters “some kind of transformation.” Women throw themselves at him — a power the cottage bestows upon its owner — and he feels altogether healthier, calmer, more lucid. His writing, based on nonsense about places exerting their own feelings, earns gravitas as he thrives in his new surroundings. As the seasons change, however, he wonders what else he might inherit from Uncle Aldo.

‘Saint Catherine of the Fields’ focuses less on landscape but maintains the growing pattern of inevitability. The narrator is a collector of songs, a researcher in ‘sean-nós’ — that is, the old style. As the Dubliner travels west to Keash to retrieve an all-but-lost song he experiences the “usual loosening” as he crosses the River Shannon. A feeling of openness descends on him, which he describes as a kind of receptivity. It’s as though he’s tuned in to the land itself.

There’s beauty and charm aplenty in these parts and Barry writes of them poetically in this story and throughout. It is in stark contrast then, when ‘Toronto and the State of Grace’ opens with the foreboding line: “The winter bleeds us out here.”

Set on the coast, isolation and bleak weather are rife in this one, and thankfully it’s cut through with dark humour by way of the characters’ dialogue. After all, as Barry pointed out during the online event, comedy is the truest mode to how we get through life. The landscape has a touch less agency here, and again in ‘Who’s Dead McCarthy’ which follows.

Set in Limerick “in the bone evil of its winter”, death is forever on the horizon and Con McCarthy, our “connoisseur of death”, always delivers the news with great fervour. He’s described by the narrator as a man “out of time somehow”, a figure that draws upon himself an “old, old rain”, which is but a small link back to the land and the superstition of it all. The closing line suggests that the narrator might go on to fulfil the role after McCarthy: inevitability abounds once more.

It crops up again in ‘Roma Kid’. Young Kizzy boards a train in Dublin, headed for Sligo, in the hopes that the countryside might be kinder to her. This story is more tender than the others, though the landscape is no less personified and at times is as terrifying as it is familiar to her. When running through the woods in the fading light of a February day she senses that the “chill in this laneway was intense and made of more than the air — it was malevolent, a badness”. An injury follows and she’s rescued by a man who takes her in as a daughter. They settle into a “type of collusion” with each other, and there’s a quiet acceptance of new-found fate as she takes on his language and traits, and eventually takes his place.

In contrast, the narrator of ‘Extremadura (Until Night Falls)’ is less successful in escaping his past. It’s February again, “an awful fucking month just about everywhere”, and he struggles to find somewhere to settle for the night. He recalls the evening he stepped onto a train and out of his life, but ultimately finds heartbreak harder to run from. Whilst its theme of heartache fits the collection, its setting causes it to stand out. However, as the shortest in the book, it acts as a quick reprieve before the title story brings us careening back to the mountain and the portentous whitethorn that so frequently appears throughout.

‘That Old Country Music’ opens with Hannah Cryan, seventeen and pregnant to her mother’s ex-fiancé, waiting in a Transit van for the baby’s father to rob a petrol station. But whilst he claims that “particular stretches of ground had for him a lucky vibration”, she feels “the presence of something very old and uncaring on the air.”

Like the characters before her, Hannah is a victim of her fate, which, in her own words, will play out “by the chorus and verse”. ‘That Old Country Music’ is the perfect example of Barry’s unique combination of lyrical prose, coarse dialogue and a humour that just about carries you through the sorrow of it all. And once more, the heavily personified setting is every bit as important to the story as the characters themselves.

Lastly, we arrive at ‘Roethke in the Bughouse’. It’s influenced by a true story about Theodore Roethke. An American poet, Roethke suffered a breakdown on the island of Inishbofin in the 60s and was subsequently committed to a psychiatric hospital in Ballinasloe, where this tale begins.

“Did you come loose of yourself on Bofin, Ted?” asks Doctor O’Reilly. Roethke has given himself up to his surroundings. As he walks the corridors of the hospital at night his mind drifts back to the “mutton necropolis” of Bofin, described in all its gruesome detail.

“Do you believe that towns have their own emotions?” O’Reilly asks. Indeed, Ted does. Echoing ‘Old Stock’, whose protagonist — another writer — also believed that places exert their own feelings, it’s a neat way to end the collection.

Geography here is not backdrop. It is not a picturesque painting that hangs in the background, although at times is every bit as beautiful. Instead, the landscape thrives in its characters in a way they find inescapable and it’s Barry’s way with words that brings it to life. Poetic. Tragic. Humorous. Filled with spirit.

If I could give praise to one more thing about this collection, it would be for the audio version. Read by Barry himself, he paces the stories to perfection — much slower than I had initially rushed into them. Take them in slowly. Embrace the language, the detail and the locations, and, like an old song, enjoy them time and time again.