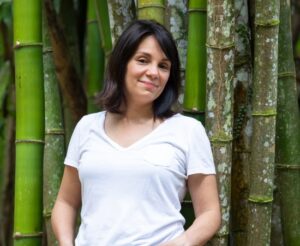 Claire Adam is originally from Trinidad & Tobago. She took an MA in Creative Writing at Goldsmiths (University of London), was a 2016 Word Factory Apprentice, and her novel, GOLDEN CHILD, was published by Faber in 2019. It won the Desmond Elliott Prize for best debut novel published in the UK, the Authors’ Club Best First Novel Award and the Society of Authors McKitterick Prize. It was featured on BBC Radio 4 Book at Bedtime, Radio 2 Bookclub with Jo Whiley, and it was listed as one of the BBC’s ‘100 novels that shaped our world’. In the USA, it was selected for Sarah Jessica Parker’s imprint, SJP for Hogarth, and was the winner of the 2019 Barnes & Noble ‘Discover’ Prize, for best fiction debut published in the USA. It was named a ‘Book of the Year’ by the Evening Standard and The Times.