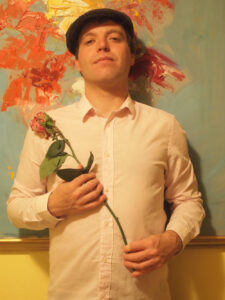 Dave Lordan is a writer, editor and creative writing workshop leader based in Dublin who has been shaking up the Irish writing scene with his passionate, risk-taking writing since the early noughties. He is the first writer to win Ireland’s three national prizes for young poets, the Patrick Kavanagh Award in 2005, the Rupert and Eithne Strong Award in 2008 and the Ireland Chair of Poetry Bursary Award in 2011 for his collections The Boy in The Ring and Invitation to a Sacrifice, both published by Salmon. In 2010 Mary McEvoy starred in his debut play Jo Bangles at the Mill Theatre, directed by Caroline Fitzgerald. Wurm Press published his acclaimed short fiction debut First Book of Frags in 2013. Also in 2013, in association with RTÉ Arena and New Island Books, he designed and led Ireland’s first ever on-air creative writing course. Alongside Karl Parkinson he makes up the popular performance poetry duo Droppin The Act and he is a renownedly passionate performer of his own work.
Lordan has read and led workshops at numerous venues and festivals throughout Ireland, the UK, Europe and North America. He is a contributing editor for The Stinging Fly and he teaches contemporary poetry and critical theory on the MA in Poetry Studies at the Mater Dei Institute of DCU.

Found on the web at: www.davelordanwriter.com