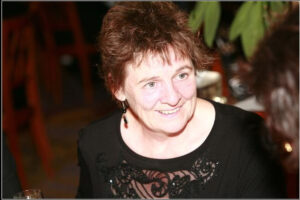 Evelyn Conlon is the author of four novels and three collections of short stories. She is delightedly engaged with the fourth at the moment. Her collections are My Head is Opening, Taking Scarlet as a Real Colour, the title story of which was performed at Edinburgh Theatre Festival and translated into several languages, including Tamil, and Telling, New and Selected Stories. She has also compiled and edited the Anthology Cutting the Night in Two, short stories by 20th Century Irish women. She lives in Dublin.

It has been said of her work – “Defiantly clear-sighted. Rigorously unsentimental. Time is man-handled. There are quite simply no boring bits” – Independent (London)

Chris Power in The Guardian said of her recent story in Dubliners100 “But if we were betting on the story Joyce would have liked most, my money would be on Evelyn Conlon’s version of Two Gallants”.

Found on the web at: www.evelynconlon.com