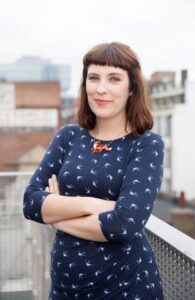 Evie Wyld’s short stories have been published in the Goldsmith’s anthology, Goldfish (What will happen to the dog after we are dead?’), the 2007 National Maritime Museum anthology, Sea Stories (‘The Convalescent’s Handbook’) and the 3:AM Magazine anthology, London, New York, Paris (‘The Building Opposite’), as well as various Granta anthologies.
Her first novel, After the Fire, A Still Small Voice, was shortlisted for the Impac Prize, the Orange Award for New Writers and the Commonwealth Writers Prize, and awarded the John Llewellyn Rhys Prize. In 2013 she was named as one of Granta’s Best of Young British Novelists, having previously been named by the BBC as one of the twelve best new British writers. All the Birds, Singing was longlisted for the Baileys Women’s Prize for Fiction and won the 2014 Miles Franklin literary award and The Jerwood Fiction Uncovered Prize 2014. She lives in Peckham, London, where she runs the Review Bookshop.

Found on the web at: www.eviewyld.com