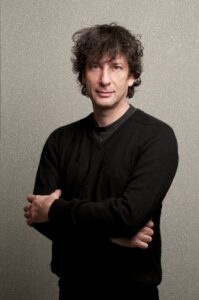 Neil Gaiman has spent his adult life making things up and writing them down. He lives more in America than he does anywhere else and is the author of over thirty acclaimed books and graphic novels for adults and children, including American Gods, Coraline, Smoke and Mirrors and The Graveyard Book. Winner of the Hugo, Nebula and Bram Stoker Awards, his work has been adapted for film, television, and radio, including Stardust (2007) and the BAFTA-winning and Oscar-nominated animated feature film Coraline (2009). He has written scripts for ‘Doctor Who’ and collaborated with Terry Pratchett, and The Sandman is already established as one of the classic graphic novels. Neil also co-wrote the script for Beowulf starring Anthony Hopkins and Angeline Jolie. As George R. R. Martin says, ‘There’s no one quite like Neil Gaiman’.

His official website now has more than one million unique visitors each month, and his online journal is syndicated to thousands of blog readers every day.