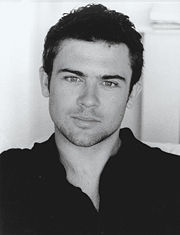 Owen Sheers is a Welsh poet, author and scriptwriter. He has published two poetry collections, The Blue Book and Skirrid Hill which won a Somerset Maugham Award. His debut prose work The Dust Diaries, a non-fiction narrative set in Zimbabwe won the Welsh Book of the Year 2005. Owen’s first novel, Resistance has been translated into ten languages. Owen co-wrote the screenplay for the film adaptation, released in the UK in 2011. In 2009 he published the novella White Ravens, a contemporary response to the myth of Branwen Daughter of Llyr, as part of Seren’s ‘New Stories from the Mabinogion’ series.

Owen’s theatrical writing includes his libretto for Rachel Portman’s oratorio, The Water Diviner’s Tale, which premiered at the Royal Albert Hall for the BBC Proms in 2007. Unicorns, almost, a one man play about the life and work of WWII poet Keith Douglas, was developed with Old Vic, New Voices. In Easter 2011 Owen wrote the script and novelisation (The Gospel of Us) for The Passion, National Theatre of Wales’ 72 hour site-specific production in Port Talbot staring and directed by Michael Sheen, The Observer described the production as ‘the theatrical event of the decade’. Owen’s short play The Fair & Tender was performed as part of the Bush Theatre’s 66 Books.

His verse drama Pink Mist was commissioned by BBC Radio 4 and is published by Faber in June 2013. His play, created with wounded soldiers, The Two Worlds of Charlie F. premiered at the Theatre Royal Haymarket and toured the UK, winning the Amnesty International Freedom of Expression Award at the Edinburgh Festival.

Owen was the Artist in Residence for the Welsh Rugby Union in 2012. His non-fiction work on the welsh team, Calon was published by Faber in February 2013. He is currently working on an original screenplay and his next novel.

Owen also presents arts and literature programmes for TV and Radio. In 2009 he wrote and presented A Poet’s Guide to Britain, a 6 part series for BBC 4 about poetry and landscape. The accompanying anthology is published by Penguin. Owen regularly teaches at Arvon centres and Ty Newydd. His professional positions have included being Writer in Residence at The Wordsworth Trust and a 2007/8 Dorothy and Lewis B. Cullman Fellow at the New York Public Library.

Found on the web at: www.owensheers.co.uk