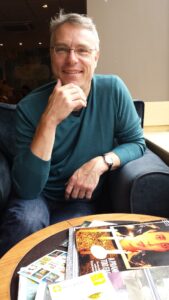 Richard Skinner is the author of three novels, all published by Faber & Faber, three books of non-fiction and two poetry collections. His work has been nominated for prizes and is published in seven languages. His poems have appeared in numerous publications and have been longlisted for the National Poetry Competition.
He is also the editor of two poetry anthologies: #1PoetryAnthology(Vanguard Editions, 2014) and The Ecchoing Green: Poems Inspired by William Blake (The Big Blake Project, 2015). Richard is Director of the Fiction Programme at Faber Academy and a tutor on its six-month Writing a Novel course. He also runs Vanguard Readings and its publishing arm Vanguard Editions.  http://richardskinner.weebly.com/

‘An impressively assured and nuanced anthology of short stories – many from fresh and very welcome voices indeed. #1ShortStoryAnthology presents us with characters who are often stalked by the shadows of their past, and the ways in which they do or do not confront that past, which continues to haunt them. #1ShortStoryAnthology is an articulate, insightful collection of short narratives which reminds us of one of the great paradoxes of urban living – the individual’s utter sense of isolation within the dense, collective space.’ Jacob Ross