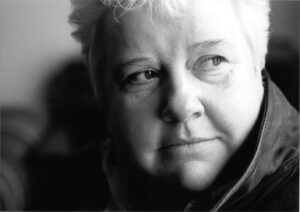 Award-winning crime writer Val McDermid is a Number One bestseller, translated into more than 30 languages, with over two million copies sold in the UK and over 10 million worldwide. She has written 27 bestselling novels; The Skeleton Road – her 28th – will be published by Little, Brown on 11 September 2014. In March 2014, she published her retelling of Jane Austen’s Northanger Abbey.

A regular broadcaster with BBC Radio, Val’s five-part Woman’s Hour drama Village SOS was broadcast on BBC Radio 4, and in 2011 Val also presented BBC Radio 4 serial The Chalet School, in which she talked about how the series of books inspired her education and career. She recently presented Pick of the Week on BBC Radio 4, has fronted several features for BBC Two’s The Culture Show and is also a supporter of the Million for a Morgue campaign, which aims to build a world class morgue that will be named after one of the crime writers involved.

In 2011, Val was the recipient of the Pioneer Award at the 23rd Annual Lambda Literary Awards. In 2010, she was awarded the prestigious CWA Cartier Diamond Dagger. This followed her induction into the Hall of Fame at the ITV3 Crime Thriller Awards in 2009, the same year in which she was elected to an Honorary Fellowship at St Hilda’s College, Oxford. She has won many awards internationally, including the CWA Gold Dagger for best crime novel of the year and the LA Times Book of the Year Award. In 2007, she won The Stonewall Writer of the Year Award. In December 2012, Val became a Celebrity Mastermind champion (!) and her winnings were donated to women’s charity, Eaves

The popular ITV series Wire in the Blood, based on McDermid’s books and starring Robson Green as Tony Hill, ran for an impressive six series. A 3-part ITV drama of Val’s A Place of Execution was broadcast in the autumn of 2007 to great critical acclaim and won the 2010 Edgar Award for Best Screenplay.

In 2012, Val publisher her first book for children, My Granny is a Pirate! Hugely successful festival appearances followed creating a new, and somewhat younger, following.

Val was born in Kirkcaldy, a small town in the heart of the Scottish mining community. She graduated in English at St Hilda’s College, Oxford – the first from a Scottish state school to do so – before going on to be an award winning journalist for sixteen years. Her first novel was published in 1987.

Val is a lifelong Raith Rovers Football Club supporter and at the start of June 2011 was appointed as a Director on the board. Val’s other loves in life include walking on the beach, cars and music. She writes full time and divides her time between Cheshire and Edinburgh.

Found on the web at: www.valmcdermid.com