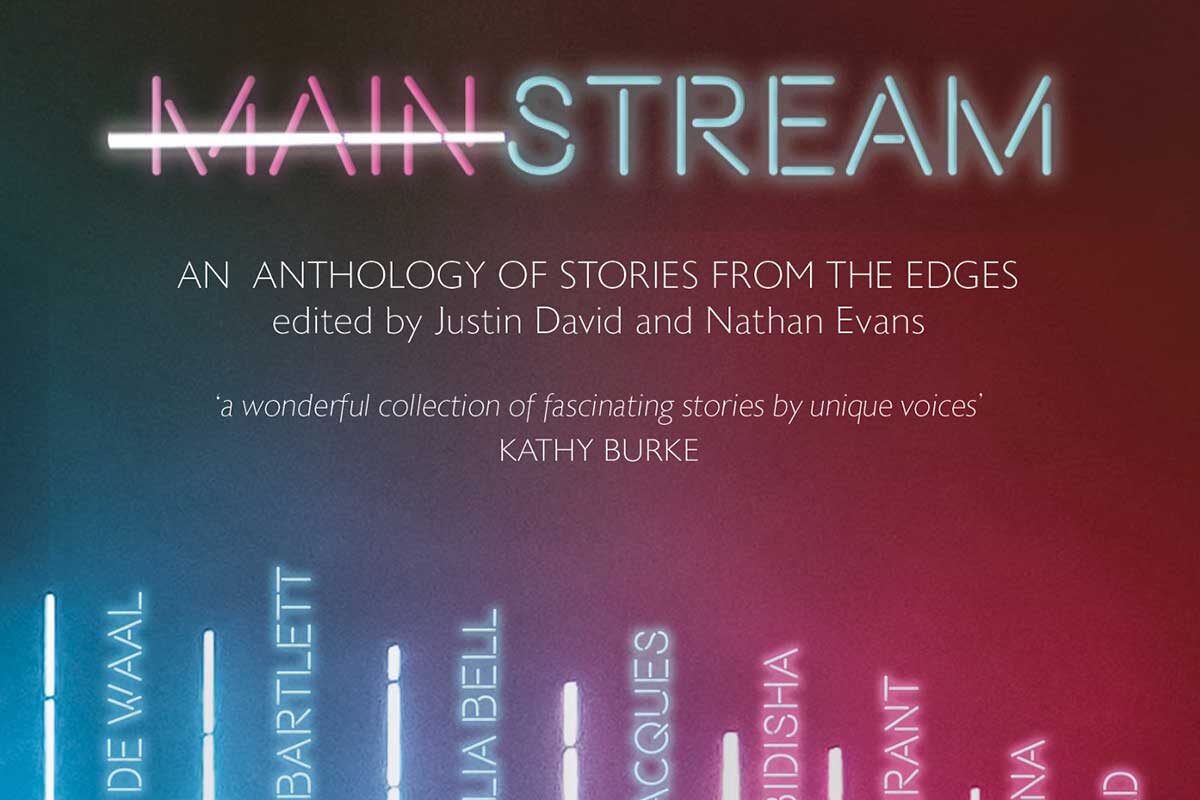 Mainstream, the new anthology of short stories from Inkandescent, is a kaleidoscope of experiences. For a reviewer, this is a challenge — it seemed almost impossible to compress each narrative together into one single review. The resounding message from the collection, ‘stories from the edges’, is as promised in the title and also more — these are universal challenges told from the margins, but also with the ugliness and discomfort which is symptom of demystifying hard truths. Mainstream should come with a trigger warning: it’s furious and it doesn’t take prisoners. You can expect to feel uncomfortable as you intrude on the lives of each of the narrators in these works. You can also rest assured that nothing will be glamorised for your benefit.

David and Evans write in their introduction that their publishing company was:

Founded “by outsiders for outsiders”, to celebrate original and diverse talent and to publish voices and stories the mainstream neglects — specifically those of the working class and financially disadvantaged, ethnic minorities, the LGBTQ+ community and, crossing the Venn diagram, those with physical disabilities and mental health issues.

From this, you can gain that Mainstream will not be a smooth or homogenous read, but I also had my concerns upon reading this. Would it be one of those book collections that only accepted each ‘minority’ writer under a certain condition? That they might be compelled to only talk about their particular disadvantage?

But Inkandescent are more aware than that. While each story does chime with the next, following a coming-of-age trajectory that navigates desire, identity and self-worth, there is very little else that joins each of the writers together. Whether you are reading about the fantastical island of Massor in Bidisha’s ‘The Initiation’ or the heart-wrenching autofiction-esque talk on a park bench in DJ Cornell’s ‘Coup de Grace’, there is a lack of pandering to a reader’s desire for a similar tone or genre. There are no heroic, plain and likeable underdogs.

Cruelty and neglect are systemic to the five very different childhoods that are presented in the opening five stories by Kathy Hoyle, Lui Sit, Padrika Tarrant, Lisa Goldman and Gaylene Gould respectively. The distorted grip on reality that each of these young narrators show reveal real worlds that have turned against them, although some understandings of this are better than others.

In Lisa Goldman’s ‘Easy Peelers’, the death of a loved one and the discrediting of the working class are recounted through the easily impressionable nature of a young girl. With her mastery of the slightly-altered language in this piece, the writer shows how an impressionable mind is shifted from what is real into the dominant version of a tragedy: where being an ‘easy peeler’ is due to your own laziness, where ‘England’s plugged into the sun’ and it’s ‘making the world better […] because we’re the best and things are bad’, and finally where the ‘May Day Massacre’ can be quickly softened into the ‘London riots’.

Innocence is synonymous with invisibility, and imaginative inner worlds are often discredited in these stories –‘we’d just read a story about an alien who talked to a flower [..] she had to believe me,’ Lui Sit’s narrator writes in ‘Giant’, and yet his inner world must be disbelieved if he is to conform to his mother’s idea of the real world.

The final story I wanted to single out from this impressive, opening five was Gaylene Gould’s ‘The Spinney’. Tracing the movement through puberty of a young woman, Gould presents stigmas around period shame and rape culture in the unfolding of a painful warning tale. The power of myths written in to cover up a taboo, in this case the ‘Witch’ who is fabricated in the place of a rape at school, holds such influence that it remains with the narrator even when she reaches adulthood with a daughter of her own — ‘Elaine breaks into a run and with each breathless step reminds herself that she is no longer ten years old, and that there is no such thing as witches, especially those that come to take your bleeding daughter as retribution.’ The power of the myth is tangible and silencing, leaving a terrible taste in the reader’s mouth.

Being susceptible to the power of someone (or something) else is also another ongoing presence throughout the collection, and there are no sudden acts of heroism or deus ex machinas popping out through the structures of any of these stories. Neil Bartlett’s ‘Twickenham’, Golnoosh Nour’s ‘Happy Ending’, Juliet Jacques’s ‘A Review of “A Return”’, Justin David’s ‘Serosorting’ and Keith Jarrett’s ‘It May Concern’ all resonate in their navigation of love and its disturbing relationship with power. Sometimes brutally sensory and exciting, other times revealing the blandness of casual relationships, self-worth is often a victim here. As Keith Jarrett’s narrator writes — ‘I searched for the ugliness I thought I deserved’. Being an object of desire also feeds off these narrators, and relationships are formed out of disassociations where even being named becomes a danger — ‘if you name something, you can fix it to you’. There is also a lonely beauty in the language and detail of these stories too, like this passage from Neil Bartlett’s ‘Twickenham’:

Most inexplicably of all, there’s a piano — really — a great, big, black grand piano– something I didn’t know anybody had in their house — and it seems to be collecting all the light in the room. The lid is a pool of oil — and there’s a sheet of music on it, floating. It looks like something somebody must have lost.

Another connection to make between these stories is an obsession with physical and psychological dismorphias. Giselle Leeb’s haunting ‘Scaffolding’ is a frightening study of the psychosomatic, finding parallels with DJ Connell’s comment in ‘Coup de Grace’ that ‘this caring for the bruises of others was what had me trapped’. The AIDS crisis looms in several of the stories too — it is a grim shadow running through the bodies and psyches of multiple characters. Justin David’s character in ‘Serosorting’ pointedly marks it as the ‘grubby stains of mortality… an infection running through us all […] we are all unclean’.

Polis Loizou’s ‘Pixmalion’ is a subtle study of the impact of social media on the modern relationship. Louizou’s multimedia narrative describes the defensive rhythms of messaging a stranger online, and the desire to seem both unattainable and uninterested:

There’s a ‘sticker’ on the photo, with a flame emoji to slide up so as to express your lust for him. It takes Herculean effort, but I only slide the flame to just over halfway. I’m sure I’m alone in doing so. Let his ego be starved a little; the doubt may even nourish him.

This piece exposes those safe, ‘screen’ flirtations which usually trail off immediately. It is brilliantly captured.

Iqbal Hussein’s ‘The Reluctant Bride’ is the study of the Partition, in which the harsh politics of love are told through the allure of an almost unbelievable fairy tale. A homage to the magical realist format, a semi-real churail narrates the piece with a playful layering of stories and a spine that ‘rat-a-tats like a burst of firecrackers’. Full of imagination yet equally weighted and painful, I was glad that the curators of this anthology included the more fantastical and speculative genres alongside pieces that were more obviously social commentary.

Mainstream is blunt, sexy and unapologetic. I was intrigued by the liveliness of each voice that Inkandescent gave ear to, and the great difficulty for a reviewer trying to pull each of the works together. Each story is its own very different act of defiance, making for an unexpected and addictive read.