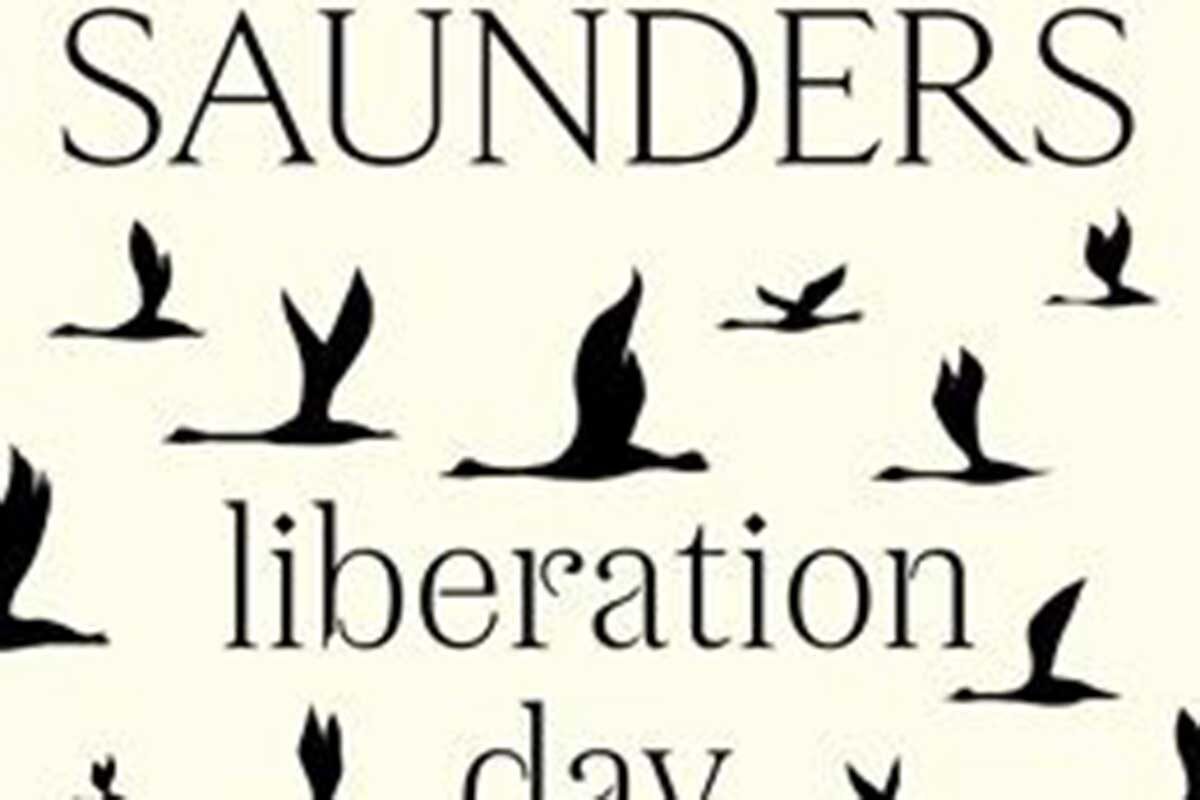 If Karl Marx had wanted to commission a writer to capture the vernacular of alienation, he would have needed to look no further than George Saunders.

What does alienation sound like? It sounds commodified. It sounds like all of us talking at once, unsure of  how to love, live and die, below a rising note of jangling American dark cheer. It sounds like Morality Crumbling in a Godless Universe, a film sound-track composed by Disney and Wal-Mart, drowning out the screams at Custer’s Last Stand. It sounds funny. And then it doesn’t. It sounds like today.

Saunders’ words smell like Hunter S. Thompson, Stephen King, Raymond Carver and David Lynch sharing a spliff in Joni Mitchell’s parking lot: masculine, compelling and disturbing. Breathe it all in: the imagery, the savour of Kentucky-fried-wise-cracking dialogue: and what wafts over to us, the readers?

Liberation Day, Saunders’ latest collection of short stories, is an event, perfumed by the sweat of serious publishing muscle. Saunders is hailed in the promotional blaze around the publication of his latest book as “The best short story writer in English- not “one of, not “arguably” but the best”. (Time). Which is askew: an unsettling weight to bear for any writer, particularly one whose fictions wrestle with morality, and given there doesn’t appear to be any competition within English literature to take the title in the generally under-publicised field of short fiction.

The new book is an event (despite the hyperbole) because Saunders has proved beyond doubt in recent years – not least in his novel, Lincoln In The Bardo, and his masterclasses (focused on the Russian classics) on short story writing, A Swim In The Pond In The Rain – that good writing in any genre speaks for itself. He is devoted to his craft, generous to other writers, and an exceptional writing talent.

Here we have nine stories populated by reflective, downtrodden, lost, regretful characters, living in both contemporary and dystopic American communities. The fiction leads us deeper into the human condition through the iteration of what-ifs, epiphanies and escalating breaking points.

Along the way, we meet Jeremy. He has had his memory erased and now exists, physically pinioned on some kind of control board,  until he is needed to entertain an entitled family – wife, husband and spoiled son – by speaking and enacting stories fed into his brain. He’s happy, in a dead-toned kind of way, because part of his secret duties include providing erotic narratives for the wife to pleasure herself with in front of him. One entertainment is an historically accurate enactment of Custer’s Last Stand, delivered before, during and after freedom – fighters step in to release Jeremy and his entertainment slave colleagues. But who wants freedom? An explosion of liberal certainties, this title story of the collection is nothing less than a liberation into sobering reality.

Elsewhere, we meet the suburban ‘Mom of Bold Action’, mother of the hapless Derek and wife to the mega-hapless Keith, a would-be fiction writer, startled into the realisation that she has been writing in the wrong genre, she is an essayist, when her beloved boy is pushed to the ground by a semi-derelict man. Being an opinionated, angry essayist, telling it how it is – (contemporary theme alert #1, no maybe that’s #2. See Jeremy above) – creates an opportunity for Saunders to explore conscience, forgiveness and judgement.

There is Genevieve, an office executive enjoying regular afternoon sex with a client of her company and Brenda, working in admin and so poor she’s pilfering paper towels and coffee from her workplace and who sees it all: “She worked longer hours than any of them and made, like, ten times less and didn’t get to lounge around discussing shit such as new clients and Lessons Learned and hadn’t got to make a spaceship out of Legos that time in Team Building but just had to sit there in her dungeon all day like a good robot and type and type while everyone else sat out there laughing and yapping about Proactive Complaint Assessment and they all left work early to go to a bar or some such shit and came in hungover and late the next morning to put in, like, ten minutes of work before sneaking out for lunch and a fuck” (Contemporary theme alert #3: you might be able to guess whether the happy ending is in the grasp of the fucker, or the worker).

There is an unexpected love story. And if you have followed Saunders’ stories over the years, a perhaps expected tale of theme-park employees. Here, they are slowly facing the truth that there will never be any visitors from above because they have been sealed in their underground world for eternity. Life is sustained through ritual, false hope, and judgement of others – an accelerating bloody hysteria of othering. (Contemporary theme alert #4 meets  theology: the absence of an interventionist God). Says the narrator’s love-interest: “ Sweetie, no-one is coming. To see how good we have done/ are doing. It is just us. Forever.“

Fans of Saunders will recognise these themes, and rejoice in his ability to remake passions and concerns that have shaped his stories for over thirty years. Born in Texas in 1958, his writing reflects his generation, born into the peace of the post-war settlement and witnessing the fragmenting of liberal political values, a belief in  progress and the fabric of the material world.

His collection, CivilWarLand In Bad Decline (1996) opened in similar territory: a theme park, constructed around a Canal Lock, selling the story of the “coolies” who built it, complete with the aroma of an Oriental meal pumped across the site every fifteen minutes. In truth, the Irish had built it but there is no budget to correct the mistake. Such are the lessons of history.

More than twenty years later, Liberation Day is also funny, grotesque and bitter, but the work carries more nuance. Saunders has explained that he is an intuitive writer, one who resonates with an observation made by the Chicago writer Stuart Dybek: “A story is always talking to you; you just have to learn to listen to it.” If that is an intuitive act, it’s also one that taps into conscious and subconscious depth of thought and not surprising that those depths are producing a tone that is more accepting, allowing melancholy and uncertainty onto the page.

In the story Love Letter, a grandfather – the most convincing character in the collection –  writes a letter to his grown-up grandson at some point in the  2020s. The state, one can imagine it to be an America in which Trump was elected for a further term in office,  now controls its citizens. The grandfather admits in the letter, which he urges his grandson to destroy after reading, that there was a critical period when, if he and others had taken action, the world would not be as it is.

He continues: ”Our lives had not prepared us for extremity, to mobilize or be as focused and energized as I can see, in retrospect, we would have needed to be. We were not prepared to drop everything in defense of a system that was, to us, like oxygen: used constantly, never noted. …As were those on the other side: willing to tear it all down because they had been so thoroughly nourished by the vacuous plenty in which we all lived, a bountiful condition that allowed people to thrive and opine and swagger around like kings and queens while remaining ignorant of their own history.”

Saunders is a superlative teacher, as his writing students at Syracuse University would testify, as we can read in his book on craft and in The Story, a community he has created on Substack to encourage and inspire other writers.

What do we learn from this collection? That Saunders likes to question: whether history has become fodder for consumerism, the narratives of films and book and art the subservient need to please. Like Jeremy, pinned to his control board and to unrequited love,  he asks “What is great? That is what my heart longs to ask. What is lush? What is bold, what is daring?” To question the impact of wealth on the young:  Jeremy notes the spoiled son has  “… no work, no art, no dreams, no joy. He just has anger and a fondness for being correct in his energetic, self-righteous disapproval of all that he sees.” And perhaps the biggest question of all: if everything is ephemeral, on what can any of us build a foundation for living?

Saunders’ fictional mood suggests we have lost both history and the plot: we are othered, we believe everything is rigged, we are in the Marxist sense, alienated. That mood and its questions are the strength of this collection. Its weakness, the layering of voices throughout the stories that, though placed in differing situations and difficulties, become too similar to each other, tipping occasionally into caricature.

In the final story in the collection, we catch the scent of a parable. A man hopes to buy the kind of historically interesting, atmospheric eighteenth century manor house that he feels he deserves, after a lifetime of low ceilings and air-conditioning vents. For complicated reasons, the elderly owner decides not to sell. Nonetheless, the would-be purchaser persists in his desire. In a series of letters over many years to the vendor, some sent and others destroyed, the narrator gradually comes to terms with his loss: “… I hope you live forever, and if the place falls down around you, as it seems to be doing, I hope even that brings you joy. It was always falling down around you, everything has always been falling down around us. Only we were too alive to notice.”

It’s deeply comforting that a writer of Saunders’ skill and thoughtfulness continues to notice so much for and with us.