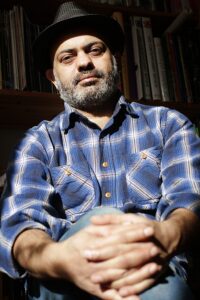 Hassan Blasim is a poet, filmmaker and short story writer. Born in Baghdad in 1973, after first appearing in English in Madinah, his debut collection The Madman of Freedom Square was translated from Arabic by Jonathan Wright and published by Comma a year later (2009). Madmanwas long-listed for the Independent Foreign Fiction Prize in 2010, and has since been translated into five languages. A heavily edited version of the book was finally published in Arabic in 2012, and was immediately banned in many Arab countries. His second collection The Iraqi Christ was published in 2013. He has won the English PEN Writers in Translation award twice, and was recently described by The Guardian as ‘perhaps the greatest writer of Arabic fiction alive’.

Found on the web at: www.hassanblasim.com