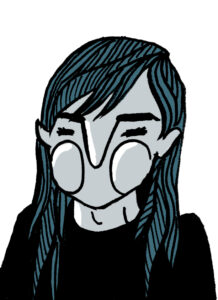 Karrie Fransman is a graphic novelist and comic creator. Her autobiographical comic strips were published in The Guardian. Her comic serial The Night I Lost My Love ran in The Times. Her graphic novel, The House That Groaned, is published by Random House’s Square Peg and have received praise from film director Nicolas Roeg and was chosen as Graphic Novel of the Month in The Observer. Her new graphic novel Death of the Artist will be published by Jonathan Cape and has been rewarded a research and development grant from the Arts Council England. She has created comics for Time Out, The Telegraph, The New Statesman, The Young Vic and Psychologies Magazine and presented her work in London, Brussels, Barcelona, Beirut, Zagreb and Moscow.

Found on the web at: www.karriefransman.com