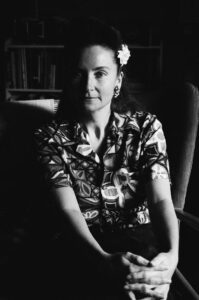 Katrina Naomi is a poet, tutor and poetry mentor. Her second full collection, The Way the Crocodile Taught Me, has just been published by Seren. Her 2015 pamphlet Hooligans, (Rack Press), was inspired by the Suffragettes.

Her poetry has appeared in ‘The TLS’, ‘The Poetry Review’, ‘The Spectator’, and on Radio 4. She received a PhD in Creative Writing from Goldsmiths in 2014 and an award from the Royal Literary Fund. In 2015 she became a post-doctoral researcher at Goldsmiths and was made a Hawthornden Fellow.

Katrina’s first full collection, The Girl with the Cactus Handshake, was shortlisted for the London New Poetry Award and received an Arts Council Award. She was the first writer-in-residence at the Bronte Parsonage Museum. Katrina is a previous winner of the Templar Poetry Competition. She is a lecturer at Falmouth University and runs Poetry Surgeries for the Poetry Society.

Found on the web at: www.katrinanaomi.co.uk