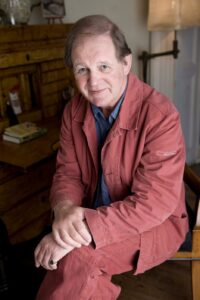 I’m essentially a storymaker, and storyteller – I’m not sure which I love most. In recent years I’ve taken to performing my stories, and have become more and more involved in adapting them for stage, concert hall, and screen. On stage there have been recent productions of Farm Boy, Friend or Foe, Private Peaceful and War Horse. The Mozart Question, On Angel Wings, Private Peaceful and The Best Christmas Present in the World have been transformed into concerts that are performed all over the country, and recent films include War Horse and Private Peaceful.

Older than I was – I’m about 120 books old. Married to Clare for coming up to 50 years, three children, seven grandchildren. With Clare I wrote my best story, the charity Farms for City Children, which has welcomed close on 100,000 children from our towns and cities to the charity’s three farms. Here the children become farmers for a week, and live the country life.

A while back now, I was involved in the creation of the Children’s Laureate project, and did my 2 years of blowing the trumpet for the best in Children’s Literature, and Children’s Arts, from 2003-2005. Others before and since have blown the same trumpet, but their own way, and to great effect. I go on banging my drum, as so many of us do. And I go on writing too, because I love it.

Michael Morpurgo, began writing stories in the early ’70’s, in response to the children in his class at the primary school where he taught in Kent. One of the UK’s best-loved authors and storytellers, Michael was appointed Children’s Laureate in 2003. He has written over 130 books, including The Butterfly Lion, Kensuke’s Kingdom, Why the Whales Came, The Mozart Question, Shadow, and War Horse, which was adapted for a hugely successful stage production by the National Theatre and then, in 2011, for a film directed by Steven Spielberg. His book, Private Peaceful has been adapted for the stage by Simon Reade and has now been made into a film, directed by Pat O’Connor. Michael was awarded the OBE for his writing in 2006.

Michael’s books have been translated into many languages including Chinese, Bulgarian and Hungarian, Hebrew and Japanese. He travels all over the UK and abroad talking to children, telling his stories and encouraging them to tell theirs.

With his wife Clare, he set up the charity Farms for City Children, which offers children and teachers from inner-city primary schools the chance to live and work in the countryside for a week. Over 100,000 children have visited the three farms run by the charity since it began in 1976. Teachers frequently comment that a child can learn more in a week on the farm than a year in the classroom. HRH The Princess Royal is Patron of the charity. The couple were awarded MBE’s for their work in education.

Found on the web at: www.michaelmorpurgo.com