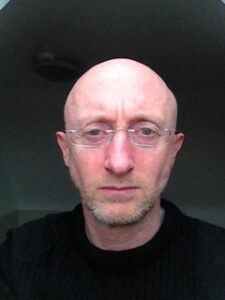 Nicholas Royle is the author of First Novel, as well as six earlier novels including The Director’s Cut and Antwerp, and a short story collection, Mortality. He has edited numerous anthologies including Darklands, Murmurations: An Anthology of Uncanny Stories About Birds and three volumes of The Best British Short Stories (2011–2013). A senior lecturer in creative writing at Manchester Metropolitan University, he also runs Nightjar Press, publishing original short stories as signed, limited-edition chapbooks, and works as an editor for Salt Publishing, where he has been responsible for Alison Moore’s Man Booker-shortlisted The Lighthouse and Alice Thompson’s Burnt Island among other titles.

Found on the web at: www.nicholasroyle.com