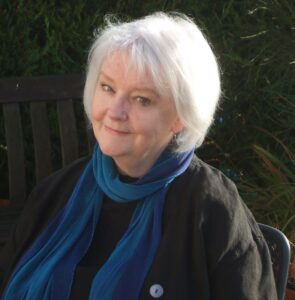 Sheila Llewellyn is currently completing a Ph.D in Creative Writing at the Seamus Heaney Centre for Poetry, Queen’s University, Belfast, whilst finishing off her first novel.
Sheila travelled and worked overseas for some years, mainly in Africa, Iran, Singapore, Russia, Germany. Then she changed careers, re-trained as a psychologist and came to work in Northern Ireland, specialising in Post Traumatic Stress Disorder. She completed an MA in Creative Writing at the Seamus Heaney Centre in 2011-12. There are some fantastic poets there – Sinead Morrissey has just won the TS Eliot Prize for Poetry – but also prose writers, playwrights and screen script-writers. She finds the creative buzz in Belfast inspirational.
In 2011, Sheila won the RTE Radio One P.J.O’Connor Radio Drama Award. She was shortlisted twice for the Costa Short Story Award, in 2012 and 2013. Over the past two years, she has also been shortlisted for the Bridport Short Story Prize, the Bridport Flash Fiction Prize, the Sean O’Faolain Prize, and the Fish Memoir Prize.