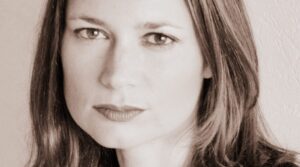 Sophie Hampton was born and brought up in London. Her work has been broadcast on BBC Radio 4 and published in Southword, The London Magazine, The View From Here, The Yellow Room, The Eastern Daily Press, Scribble magazine and Ether Books.

Sophie has read her stories at venues including the London Review Bookshop in Bloomsbury, The Society Club in Soho and the Cork International Short Story Festival. She has an MA (Distinction) in Creative Writing from Sheffield Hallam University for which she was awarded the AM Heath Prize. She is currently editing her debut collection, White Socks and Weirdos.

Found on the web at: www.sophiehampton.wordpress.com